I can’t help but wonder how I feel. As I lay under the moonlit sky with millions of stars glistening that seem to be in arms reach. Or the fact that the Kuiseb River in the middle of the desert is flowing. Not to mention it hasn’t flowed since 2005! I cannot grasp my feelings towards this experience. Do I feel lucky? Enlightened? Small, like a grain of sand, is to me but me to the earth? (if you catch my drift) Maybe even privileged. In the sense that no one can truly have the exact experience that I have had personally. Its something I can keep to myself and I don’t need to explain to anyone.

Tuesday, February 14th, was bittersweet. It was my last night in Swakopmund until God knows when, but I couldn’t have asked for a better ending to this chapter. The day started waking up a little bit drunk from the night before. Something that’s been a bit more common than usual but certainly not a problem; in case you are worried. This time it was from a lekker farewell party the night before. I stumbled out of bed and proceed to the fridge where I would then gulp down 100% apple juice which seemed to have hit “the spot”. You know the one where you wake up dehydrated and a little bit of juice seems to make it all better? Ya, that one.
I had t-minus 3 hours to pack my bags I so I thought that I’d get a head to start. I was folding my clothes, sorting everything out and hmm my passport is nowhere in site. Typical me, no one was truly surprised. I mean I’m not THAT bad to lose my most important document, but hey I’ll never doubt myself. After about 30 minutes I found it under the bed in the corner, so that was a huge relief. Now I had t-minus 1 hour because of Netflix. Long story short I finished packing with 20 minutes to spare. Maybe even a new record.
Bones and Lena had come to fetch me from Cois and Bianca’s house to start making our way to the river. The farewell wasn’t so harsh because I knew it wasn’t goodbye forever. In just one and a half months and I would see them in Europe. At 1600hrs we were ready to start the drive.

Bones and Martin were sitting in the front of the truck. Lena, Ambra and I made ourselves comfy in the hub of the truck. I must say it was quite an enjoyable ride. We laid down mattresses, drank beer and listened to my mediocre playlist, which occasionally played a bumping song. No more than 90 minutes later we arrived at the river. I have talked to many people in Namibia and they seem to cherish the rain more then they cherish the oxygen that keeps them breathing every day. So I knew this was a very extraordinary day to have the opportunity to see something so surreal. I couldn’t stop thinking about it the whole ride. 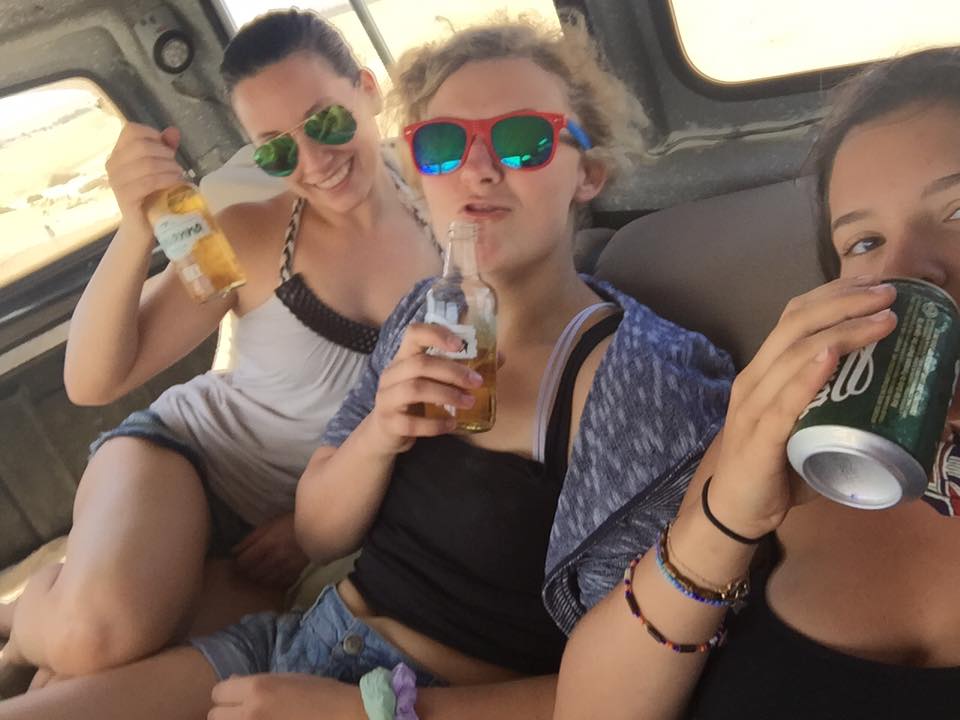 When I climbed out of the back of the truck my eyes widened and my heart raced with excitement which was most likely similar to the scene in “Charlie and the Chocolate Factory” when the children opened the doors to find a chocolate river. Anne, Dawie, Peter and Nicki are swimming in the river. I had a moment of “Wow this is actually happening”. I quickly changed into my swimsuit and took my first jump into the Kuiseb River. I would call it more of a step and a fall but jump sounds more graceful, so lets’ leave it at that. Lena and Ambra joined immediately after.

I first noticed the water on my skin. It was warmer than I expected but after a hot car ride, it was reasonably refreshing. When I stood up my body seemed to be coated in chocolate. It was ever so tempting to lick my fingers clean. I can’t help but think of “Charlie and the Chocolate Factory” when describing the colour of the river. The water closely resembled milk chocolate. As soon I entered the water my body disappeared.

We spent some time in the river laying on our backs and walking back up and then going back down. You can go as far as you want down the river but you must remember you have to walk back up.

Lena is from Germany, Ambra from Switzerland and I from Canada and we were missing the snow. We climbed the dune next to the river and made sand angles. Bones later joined and we climbed a bit higher to enjoy the unforgettable view.

We climbed down the side of the dune and went to the top of the river just before a small man-made waterfall. About 400m from where base camp was. The four of us relaxed on our backs in the most perfect lazy river Mother Earth could provide for any human. I put my ears in the water to create a noise cancelling effect as I floated down the river. It gave me time to not have any distractions. I experienced the river through my eyes and the feeling of my body.

Once we got back to base camp I enjoyed smothering my body in mud. I thought to myself “Is this the perfect life for a pig?” I could only imagine the answer would be yes. I started a mud fight, Lena and I being on a team and Bones and Ambra; our opponents. It lasted a short 5 minutes but the laughter and memories will last a lifetime.
It was almost time for the sun to set so Anne, Peter, Nicki, Lena and I climbed higher than we did before to have an uninterrupted view. Anne’s life is in the sand as she is a sandboarding instructor so she was running circles around us climbing the dunes. She truly does make it look effortless. I was bitching but I’ll always pat myself on the back when I actually make it to the top. The view is worth it. We stayed on top for 30 minutes as we watched the sunset. We waited for the sun to quickly disappear behind the towering sand dunes in the distant. The edge of the dune is so perfect and soft that it looks 2D. Words cannot describe something so beautiful.

The fire was glistening just waiting for us to braai. Tonight would be a 3-course meal. Lena, Nicki, Peter and I prepped veggies which are slightly unusual. It consisted of potatoes, little pumpkins and mushrooms. All three stuffed with cheese. Anne was there for light support. While Dawie, Martin, Bones and Ambra tended to the fire… so they say. It looked more like they were enjoying the fire to me. No harsh feelings. The first course was the veggies. They turned out great but Lena decided to dump sugar on ALL the potatoes mistaking it for salt. Does that count as sweet potato now? Oh well, we made it work and they were finished off. Up next is the steak. The moment we have all been waiting for as soon as the fire was lit. The steak was grilled to perfection, rare just how we all like it. Last but not least BACON. Bacon and steak on a skewer, what a wonderful dessert.

At 20hrs the moon has started to come up. As the fire died one at a time we wondered off to bed. As we tucked ourselves into our beds the nocturnal animals were starting to come alive.